From Mahou Galaxy Wiki
Jump to navigation Jump to search

The Integrus, activating a Biowarp jump.

I am the ship.

Its shields are my willpower.

Its lasers are my white-hot fury.

Its engine is my yearning for freedom.

When I am at my station, its metal and my flesh are one and the same.
—Creed of the Biowarp Mages

Biowarp is the primary method of faster-than-light travel in Mahou Galaxy. This method requires the use of a Biowarp Mage to function as a living battery for the vehicle.

BioWarp technology was invented around the founding of the GA, allowing the new faction to explore and colonize the galaxy. Before this, non-magical systems were used, but FTL travel was impossible.

During the the Great Legion War, the Biowarp Mage of the Castaway, Alyanna Fenris was tortured to invoke her magical defensive powers and charge the ship's massive laser, which was used to decimate both the contested Legion hive below, and the ship's own crew. The ship was later sabotaged with Fenris aboard it and its captain, Orpheus Ardentblade vanished without a trace.

Over time, Biowarp technology has improved to the point where a mage is no longer required. Devices have been built to autonomously charge and operate a Biowarp drive, however ships with dedicated Biowarp Mages will always outperform an automated vessel. 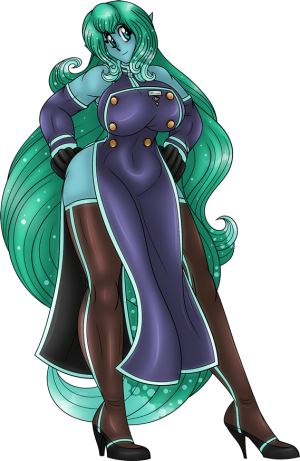 Biowarp Mages, in addition to acting as a living battery and/or fuel source, maintain a spell cast over the entire vessel. This is known as a Relativity Shield, a red translucent barrier that leaves rainbow-colored streaks in its wake. The Relativity Shield has two major effects. For one, it creates a localized area around the ship in which relativity does not apply. This is what enables faster-than-light travel in the first place, as moving any faster than light under normal circumstances would slow down time through relativity. Its other effect is to generate a barrier that absorbs kinetic impacts, such as from micrometeorites that would tear through the ship if they collided at warp speed. The kinetic energy from the impact is then generated into excess energy, increasing the speed of the ship considerably.

Without this shield in effect, moving at or above light speed is impossible, as time dilation would counteract such high speeds and render any form of travel moot.

The overall design of a Biowarp suit varies from faction to faction, but they are most commonly skin-tight and form-fitting, enough to stretch to fit most sizes while maintaining an adequate amount of comfort. Along the entire body of a Biowarp suit are glowing lines, made out of mahoucite. These are known as Mahoucite Traces and assist in the channeling of energy into various systems. In order to properly function, these traces must both make contact with the mage's skin and not be covered on the outside.

Below is a list of the designs one can expect from a Biowarp Suit in each faction.

Castaway Treaty Systems: Biowarp Commando uniforms are very similar to other factions' suits, however they often have an emblem emblazoned on the chest, and various accessories such as a cap or ear-plating.

Angelic Protectorate: Armored plating covers various parts of the body while still not impeding on the function of the suit underneath. AP Biowarp suits tend to look like light armor.

Galactic ANarchists: The GAN Reapers' Biowarp suits are very distinct, featuring jagged mahoucite traces along the majority of the body, and uniquely, a large hooded cloak connected to an armor piece around the neck. The cloak features a split directly down the middle, appearing as two giant coattails.

Legion: Legion Pilot armor is rather distinct compared to that of other facets, often consisting of skin-tight leotards with dark green armor plating, embedded with golden globules that function as solar panels. When not piloting a ship, Pilot armor often has a method of flight, such as wings or a jetpack built into it.

Elemental League (Consortium): Consortium Biowarp suits are slightly less form-fitting than that of other factions. Their design is reminiscent of naval officers, with buttons and lapels. They have a distinct official, or casual business look to them.

There are multiple facets that use Biowarp channeling.